Flutter is Google's mobile SDK for crafting high-quality native interfaces on iOS and Android in record time. Flutter works with existing code, is used by developers and organizations around the world, and is free and open source. In this codelab, you'll create a simple Flutter app. If you are familiar with object-oriented code and basic programming concepts such as variables, loops, and conditionals, you can complete this codelab. You don't need previous experience with Dart or mobile programming.

What you'll learn in part 1

In part 2 of this codelab, you'll add interactivity, modify the app's theme, and add the ability to navigate to a new page (called a route in Flutter).

What you'll build in part 1

You'll implement a simple mobile app that generates proposed names for a startup company. The user can select and unselect names, saving the best ones. The code lazily generates ten names at a time. As the user scrolls, new batches of names are generated. The user can scroll forever, with new names being continually generated.

The animated GIF shows how the app works at the completion of part 1:

Set up your Flutter environment

You need two pieces of software to complete this lab: the Flutter SDK, and an editor. This codelab assumes Android Studio, but you can use your preferred editor.
You can run this codelab using any of the following devices:

Create a simple templated Flutter app, using the instructions in Getting Started with your first Flutter app. Name the project startup_namer (instead of myapp). You'll be modifying this starter app to create the finished app.

Tip: If you don't see "New Flutter Project" as an option in your IDE, make sure you have the plugins installed for Flutter and Dart.

In these codelabs, you'll mostly be editing lib/main.dart, where the Dart code lives.

Replace the contents of lib/main.dart.

Delete all of the code from lib/main.dart. Replace with the following code, which displays "Hello World" in the center of the screen.

Tip: When pasting code into your app, indentation can become skewed. You can fix this automatically with the Flutter tools:

Run the app. You should see either Android or iOS output, depending on your device. 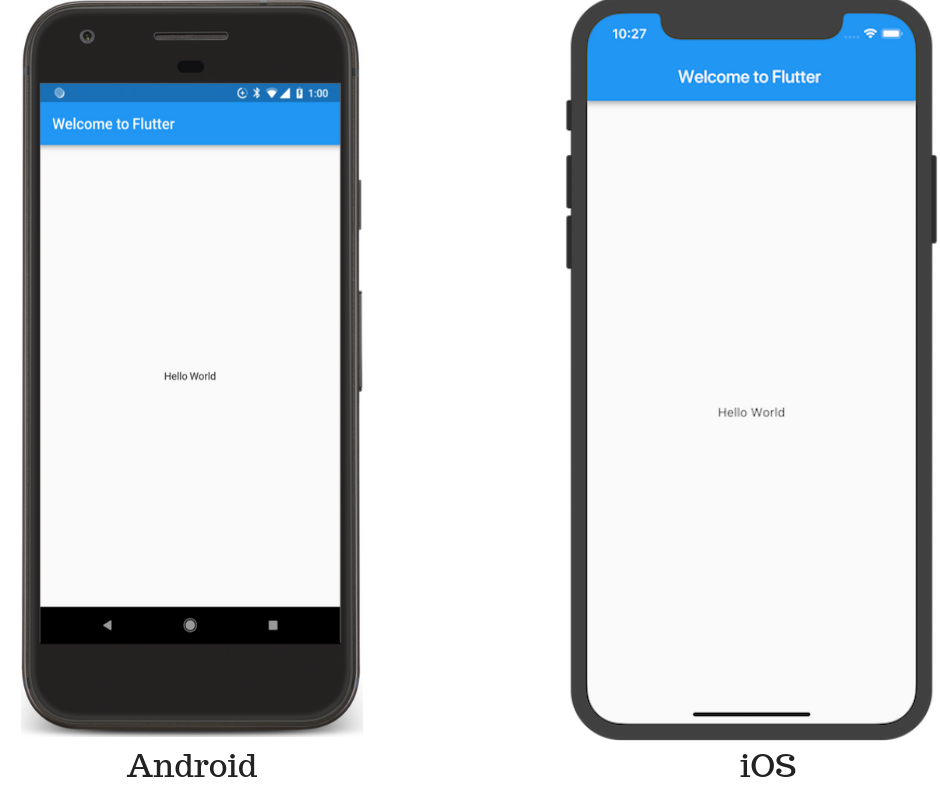 Tip: The first time you run on a physical device, it can take awhile to load. After this, you can use hot reload for quick updates. Save also performs a hot reload if the app is running.

Use an external package

In this step, you'll start using an open-source package named english_words, which contains a few thousand of the most used English words plus some utility functions.
You can find the english_words package, as well as many other open source packages, on pub.dartlang.org.

The pubspec file manages the assets for a Flutter app. In pubspec.yaml, append english_words: ^3.1.0(english_words 3.1.0 or higher) to the dependencies list:

While viewing the pubspec in Android Studio's editor view, click Packages get. This pulls the package into your project. You should see the following in the console:

In lib/main.dart, import the new package:

As you type, Android Studio gives you suggestions for libraries to import. It then renders the import string in gray, letting you know that the imported library is unused (so far).
Next, you'll use the english_words package to generate the text instead of using the string "Hello World".

Make the changes shown below:

If you didn't change Center to "new Center", the type system will warn that the Center object should not be typed as a constant (const), because its child Text object is no longer a constant. Therefore, both Center and Text must create instances using new.
If the app is running, use the hot reload button (

) to update the running app. Each time you click hot reload or save the project, you should see a different word pair, chosen at random, in the running app. This is because the word pairing is generated inside the build method, which is run each time the MaterialApp requires rendering, or when toggling the Platform in Flutter Inspector. 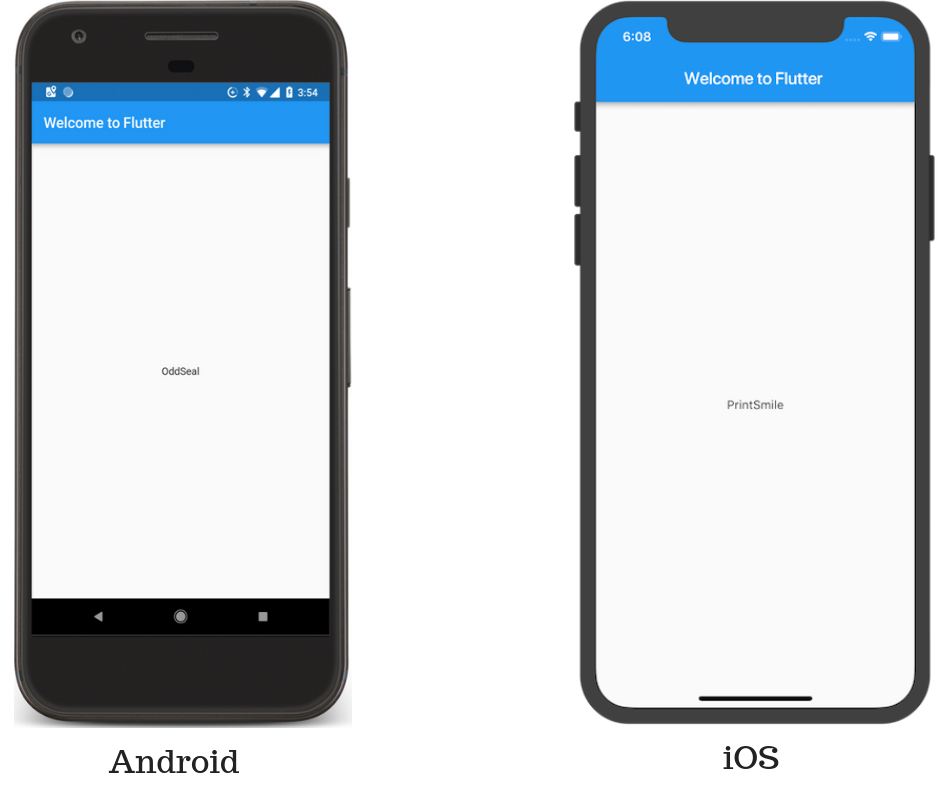 Problems?
If your app is not running correctly, look for typos. If needed, use the code at the following links to get back on track.

Stateless widgets are immutable, meaning that their properties can't change—all values are final.
Stateful widgets maintain state that might change during the lifetime of the widget. Implementing a stateful widget requires at least two classes: 1) a StatefulWidget class that creates an instance of 2) a State class. The StatefulWidget class is, itself, immutable, but the State class persists over the lifetime of the widget.
In this step, you'll add a stateful widget, RandomWords, which creates its State class, RandomWordsState. You'll then use RandomWords as a child inside the existing MyApp stateless widget.

Create a minimal state class. It can go anywhere in the file outside of MyApp, but the solution places it at the bottom of the file. Add the following text:

Notice the declaration State<RandomWords>. This indicates that we're using the generic State class specialized for use with RandomWords. Most of the app's logic and state resides here—it maintains the state for the RandomWords widget. This class saves the generated word pairs, which grows infinitely as the user scrolls, and favorite word pairs (in part 2), as the user adds or removes them from the list by toggling the heart icon.
RandomWordsState depends on the RandomWords class. You'll add that next.

After adding the state class, the IDE complains that the class is missing a build method. Next, you'll add a basic build method that generates the word pairs by moving the word generation code from MyApp to RandomWordsState.

Add the build method to RandomWordsState, as shown below:

Remove the word generation code from MyApp by making the changes below:

Hot reload the app. The app should behave as before, displaying a word pairing each time you hot reload or save the app.

Tip: If you see the following warning on a hot reload, consider restarting the app:
Reloading...
Not all changed program elements ran during view reassembly; consider restarting.
It may be a false positive, but restarting ensures that your changes are reflected in the app's UI.

Problems?
If your app is not running correctly, you can use the code at the following link to get back on track.

In this step, you'll expand RandomWordsState to generate and display a list of word pairings. As the user scrolls, the list (displayed in a ListView widget) grows infinitely. ListView's builder factory constructor allows you to build a list view lazily, on demand.

Tip: Prefixing an identifier with an underscore enforces privacy in the Dart language.

Next, you'll add a _buildSuggestions() function to the RandomWordsState class. This method will build the ListView that displays the suggested word pairing.
The ListView class provides a builder property, itemBuilder, that's a factory builder and callback function specified as an anonymous function. Two parameters are passed to the function—the BuildContext, and the row iterator, i. The iterator begins at 0 and increments each time the function is called—once for every suggested word pairing. This model allows the suggestion list to grow infinitely as the user scrolls.

Add the entire _buildSuggestions function, shown below, to the RandomWordsState class (delete the comments, if you prefer):

Update the build method for RandomWordsState to use _buildSuggestions(), rather than directly calling the word generation library. (Scaffold implements the basic Material Design visual layout.)

Restart the app. You should see a list of word pairings, no matter how far you scroll. 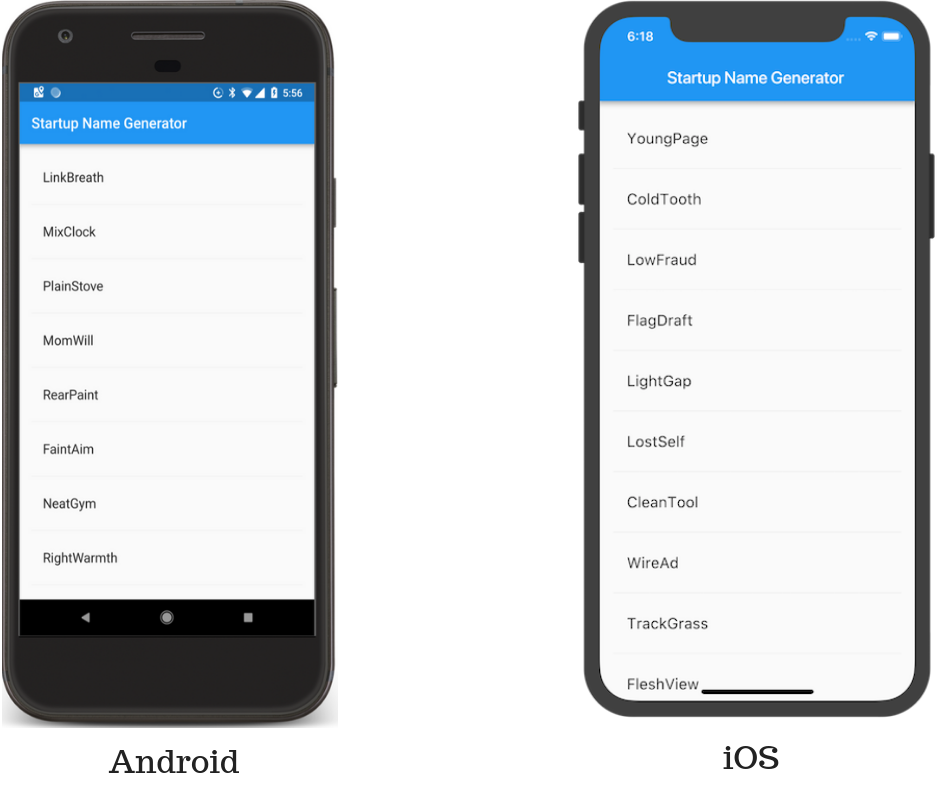 Problems?
If your app is not running correctly, you can use the code at the following link to get back on track.

You have completed part 1 of this codelab!

Learn more about the Flutter SDK:

Popular posts from this blog 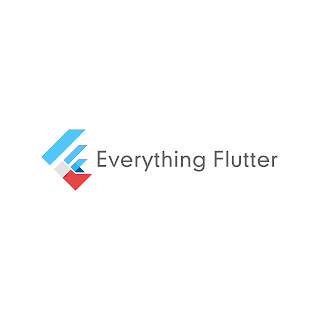 Flutter is Google's mobile SDK for crafting high-quality native interfaces on iOS and Android in record time. Flutter works with existing code, is used by developers and organizations around the world, and is free and open source. In this codelab, you'll extend a basic Flutter app to include interactivity. You'll also create a second page (called a route) that the user can navigate to. Finally, you'll modify the app's theme (color). This codelab extends part 1, Create a Lazily Loaded List, but we'll provide the starting code, if you'd like to start with part 2. What you'll learn in part 2How to write a Flutter app that looks natural on both iOS and Android. Using hot reload for a quicker development cycle. How to add interactivity to a stateful widget. How to create and navigate to a second screen. How to change the look of an app using themes.
What you'll build in part 2
You'll start with a simple mobile app that generates an endless list o…
Read more 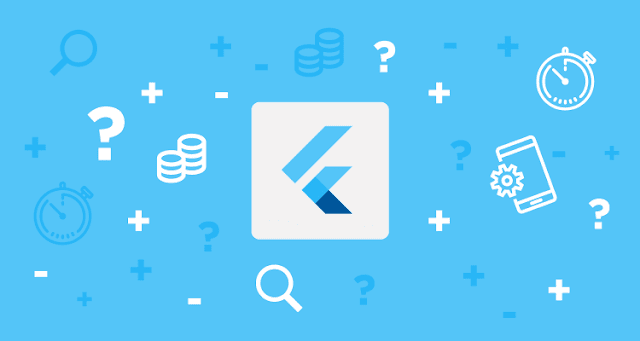 So, you've heard about Flutter?
You think it's cool but you're not sure how it can really be of help or where it stands amongst other similar platforms like itself.

This 'Everything Flutter' series is a Flutter-focused walkthrough inspired from the Flutter Study Jam and DevFest events by GDG communities.

In this first part, we'll go through the very basics.
Let's go through a few details.

Flutter is Google’s mobile SDK that helps developers craft high-quality native experiences across mobile platforms in record time. Flutter is the next step in app development because of its Speed And Performance (Fast, Smooth And Predictable), Flexibility (customization, control), Native Look And Feel (Familiarity, ease of use), and Less Time To Market (Rapid development, free). Flutter is Written In Dart Language.

Dart is an open-source web programming language developed by Google. It is a class-based, single-inheritance, object oriented language…
Read more